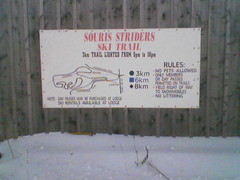 Souris Striders Trail Map
Originally uploaded by blue_william.
I drank a Rockstar in hopes of being able to write, but it’s really just helped me to avoid the labour of narrative in a more flighty, jittery way. Instead, here are some skiing adventures.

The other day I went around the perimeter (6km), and that was fine, and I got down all the hills without falling – skiing downhill with cross-country skis is much more difficult than it is with downhill skis, also you tend to have wider trails and more margin for error anyway. I even made it down one that was poorly tracked, where my right ski flew right out of the track and I had a heck of a time keeping my balance. I did fall, but it was on a fast, tight curve on a relatively flat stretch.

Today I did the complete trail (8km), and the conditions were superb – I needed the sticky white wax because the temperature was hovering above freezing, but I didn’t backslide much, and it was easy to stay warm – I even took my mitts off!

Naturally, on the last hill, there’s a sharp curve leading into it, and it’s poorly tracked and almost impossible to stay inside. I started the hill flailing and ended it with a face plant. In the course of the impact, I cut myself on my left thenar eminence, but it’s nothing serious. =) I guess I should have kept the mitts on, or put them on for the hills. Anyway, the worst part was watching the next two skiers whiz by me as I stood off to the side and wiped the snow off my coat and glasses.

I plan to ski at least every other day, weather-permitting, as it’s a good thing to do while listening to podcasts on my MP3 player, and Aunt Shirley says I need to go at least six more times to make the membership pay for itself. =) I like going alone, too, as I can go at my own pace and not have to worry about where my drive home is on the trail. There’s even a lit part, so you can go at night without a light if you wish. For a small town, it’s all pretty sophisticated, really.

Uncle Shane is currently in El Salvador; I have to keep track of his location so that I know how to answer the phone when people call looking for him. It’s a lot of fun to say things like, "Sorry, he’s in Honduras." Also, I am using his skis.

The response to Lianne George’s vitriolic, misguided missive about Gen-Y “entitlement,” “Dude, where’s my job?” continues to pour in on both sides:

The Establishment Speaks
From the February 8th Maclean’s:

“I am a retired teacher. During my 36-year career I heard a lot about encouraging kids, building their self-esteem and not hurting their psyches. Building integrity was not mentioned. Now an alarmingly growing number of teens have an inflated sense of entitlement but no work ethic. They know all about their “rights” but nothing about their responsibilities. Plagiarism has become a big problem. With them it’s me, me, me. Which brings me to the article… We now have a serious world economic crisis. Your article says that the incentives these Millenials crave “involve self-determination, being recognized for good work, and regular feedback.” My experience with them is that they will want promotions for merely existing, recognition as if their work were gold, and only positive feedback.”
-- Ghi Dean, Burlington, Ontario

“I read this article twice to make sure I got it right. If ever there was a case for mandatory military training for our youth, this is it. It is horrible to contemplate that people of this ilk will some day run this country. God help us all.”
-- Linda Smith, Owen Sound, Ontario

The Kids Respond
From the February 2nd Maclean’s:

“As a so-called “Net Gener,” I took offense to the ridiculous article… It is offensive to people my age. The issue is much deeper than having grown up with pats on the back. No one I know was recruited out of college into management positions. Most of the university graduates I know could not get a job after graduation without heading back to school for even more education. There is no option of “paying your dues in the mailroom” and moving up to a management position. According to Jean Twenge, a professor of psychology quoted in the article, we “expect to go to college, to make lots of money, and perhaps even be famous.” Make that: we are expected to go to college, pay lots of money, put ourselves into debt to get an entry-level job that is likely just a contract and doesn’t actually pay benefits, which will leave us in debt and force us to live with our parents until the age of 30. Perhaps we feel entitled because unlike previous generations we have paid many dues before we even get a shot at a decent job.”
-- Karen Mayo, Toronto, Ontario

“I could not have been more disgusted at the advice that the self-proclaimed Gen Y expert, Jason Ryan Dorsey, is farming out to the boomer generation about how to keep their employees happy. Birthday parties? Please. You’re looking for ways to retain employees? The answer is simple: respect. Today’s up-and-coming generations do have a lot to offer in the workplace, and it doesn’t come in the form of looking for quick freebies and handouts. Since when is positive reinforcement seen as a negative? I don’t have to run the ship, but at the very least I like to know that my opinion is heard and valued in the workplace. Contrary to popular opinion, skilled members of society do exist within Gen Y. And we couldn’t care less if you knew the date of our birthday.”
-- Jenna Webb, Regina, Saskatchewan

I’m going to have to side with my peers on this one. Perhaps I am not as disciplined as my forefathers, but I don’t see boot camp as the answer. Perhaps I appear to be a lazy and shiftless wannabe writer who avoids employment, but that’s because the opportunities to which I am eligible are dead-end, pointless, and would barely be worth taking up – I’ve got my hard-earned savings, and I’m going to use them… on more school.

I’d actually be surprised if my generation ever gets to become the establishment, because the baby boomers are still going strong, and while they have an iron grip on our institutions and politics, combined with a downturn in the economy, they’re less inclined to retire than ever. Heck, I’ll be surprised if retirement as we know it today even exists when I’m 60… or 80.

Well, I’ve never paid taxes. So what do I know? But we’ll all be paying up soon, and when the baby boomers start to leave the workplace in greater numbers (and for the most part the positions will go with them), the Gen Y entitlement party will be over, if it ever began.
Collapse