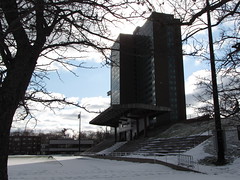 Canada 2009
A collection by blue_william.
On Monday I drove into Charlottetown to pick up my laptop from the shuttle driver and to do some other errands (including buying a thank-you card). I had been really excited at the prospect of zipping around Charlottetown on my own, but the slushy parking lots and cold temperatures really dampened my enthusiasm. Also discovering that I needed to buy wiper fluid at Canadian Tire and put it in – and knowing I would do it thanklessly, was a bit of a jarring entry into semi-adulthood.

It’s funny; I thought my culture shock would be over in and around Halifax, but I’m reliving it again here. Heck, it started when I got on the shuttle van. There’s just so much that I’m noticing. I even see family members through new eyes. One thing I can say that has actually changed is that I’m expected to be an adult and few allowances are made for me. This is a good thing, because with responsibility comes autonomy. Well, sort of.

I just polished off a semi-skunky Rickard’s White. They’re the same ones that were in the basement the last time I was here. =) Maybe I’ll pour myself another one… Alright, Red. Maybe I’ll go through the whole rainbow…

We went cross-country skiing tonight. Aunt Shirley showed me how to wax the skis, and we picked up her friend and went out to the trail. The wind cut like arrows across the fields surrounding the lodge, but once we got into the woods it was totally calm. I was able to keep up the pace for a while – longer than I thought I’d be able to, really, not having skied for several years – but then they all wanted to go on one of the outer loops that wasn’t lit. It began with a descent.

I didn’t have a light, but they all did, and we figured that I could just follow them. So off they go and I wait behind to give a good margin of safety since it’s hard to stop, and then I realize that with them went my only source of light. Well, nothing to it… I launch off into the darkness and it’s OK for a while as I glide helplessly. It was funny going down in almost complete darkness, not being able to see the tracks, knowing that I was almost certainly going to fall. And poof, I did. “This wasn’t the smartest idea I ever had,” I murmured as I trundled towards Aunt Shirley, who’d kindly stopped at the bottom to wait for me.

(“William George, William George of the New England-Acadian Forest, strong as he can be… Watch out for that tree!”)

Anyway, it was refreshing and exhilarating. Oh, a girl lost her cell phone somewhere on the trail, and I was asked if I’d seen it. Boy, that would suck. I was glad I still had mine secure in my coat pocket. As for the skiing, the conditions were perfect. I’m aching in places I haven’t ached in a while, but it’s all good.

I also remembered suddenly that I skied a lot as a child! Despite my nebulous narcissistic assertions to my classmates at Dundas, I wasn’t very good, but it was something I enjoyed. Why did I stop? Well, part of the reason was the move to Bedford. But another important part was my mother: I remember that she didn’t want me skiing alone, and there was one time I was out in one of the back fields at the farm, and I heard this faint “William! William!” and it went on and on and on for minutes, so I went back, and because of some rumoured coyotes, my skiing privileges were essentially taken away. The following year, Grade Six, was better because it was just me and Dad and I could go outside whenever and to wherever I wanted. But I also got my Super Nintendo that year and started playing video games in the basement instead of going out into the cold. (Not that I’m complaining; Super Mario World and Mario Paint and Super Star Wars were good times.) I’m cold-phobic now, but I never was as a kid! Going on this ski outing made me feel like a kid again – it was cold, but I could take it.

Heh-heh, there was also the first time I tried downhill skiing, also in PEI, if you can believe it. It was a school trip, so in a sense the pressure was on, and here’s what happened: I never got off the bunny hill – I wasn’t listening when we were in the lodge, and nobody told me (directly) that I had to maneuver through the flags to get my lift ticket validated. By the time I learned this, it was time to go! Boy, was I steamed.

Oh, you know, there was this one girl who had it worse – she had to ski on the cheaper cross-country run because she or her family didn’t have the money to pay for the downhill gear rental and lift ticket. Geez, someone should have stepped in and chipped in – my only “excuse” is that we were a bunch of snotty little shits. To her credit, she put on a brave face, but the whole thing was unnecessary – a buck apiece from the rest of us, privately, could have covered it. But that never occurred to us, oh no.

HAHA this reminds me of another incident in which I was the bratty, greedy, ridiculous one – someday when I’m drunker than I am I may recount it. A hint: My father was doing the right thing at another time when the issue of money came up, and I wasn’t going along with it. I turned it into a humorous experience after the fact, but the fact remains that I was an insufferable greedy little snotbag.

You know what? I deserved to go to Bedford and be taken to within a hairsbreadth of suicide! I deserved to have the scorn and ridicule of over a thousand of my peers! Taught me a lesson, I say. I would never have learned what I know now had I stayed on PEI. I shudder to think of the person I might now be.

As for the simple yet complex pleasure of cross-country skiing, I wish I had friends here with which to share experiences like this. When I lived here as a child, I didn’t know how to make friends, so the legacy is… I have no friends here!

I’m starting to strike items off my to-do list, but it’ll be a while before I get to the bottom of it. Meanwhile, I am immeasurably pleased to start sharing photos again! I’ve got a new camera and it works like a charm – the only drawbacks are that I’m still learning its ins and outs and that it’s a bigger camera and more of a concern to carry around. Anyway, here’s what I’ve been up to and what I’ve been shooting. I’ll continue to use my old camera, but I sent it away to get the CCD replaced. The high heat and humidity of the Japanese summer maimed it.

Talk to you soon!
Collapse