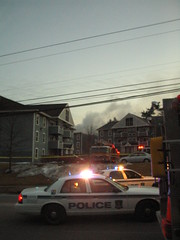 Fire in Bedford Village
Photos by Will Matheson.
There was a nasty apartment building fire in Bedford tonight, which I saw when I got off the bus. There were fire and police crews there in numbers that I've never seen. The building itself was a smoking ruin at the time I passed through the scene (I had to in order to get home - it's just as well I had planned to walk as the road was blocked to private vehicles).

Scenes like this give you second thoughts about apartment life. The safety of your life and possessions depends largely on other people not screwing up. If you lived in that building tonight, with the nice view of Bedford Basin and the brief stroll to the bus stops and the grocery store, you'd have lost everything you own.

What would you do if you lost everything?
Collapse