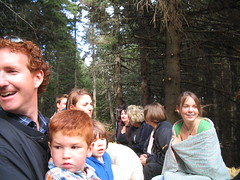 2006 Matheson Family Picnic
Another photo update for your pleasure... I still have to do the decennial Ross Reunion (which happened a week earlier), but tonight I put up the annual Matheson Picnic (because it was shorter - only 29 photos as opposed to ~180). So later I'll go back and put the sets in chronological order. I'm still getting my feet wet with this Flickr thing.

Speaking of hay, I helped unload 4 wagonloads of straw on Thursday and baled 5 wagonloads of hay on Friday. On Saturday morning we unloaded those wagons, and before we even finished that I was half past dead. Much to my relief, I was charged with staying at the farm to look after my sisters while the others went and baled more hay... which I will help unload at 8am tomorrow. At least I got today off to watch the final round of the PGA Championship. My blisters are healing nicely, the allergy meds aren't working, but I still don't want to go back to that call centre ever, ever again.
Collapse